CustomBuild is a tool which manages DirectAdmin-related services, such as WWW, E-mail, SQL, PHP, and others. Most of the packages are compiled from the source. The build process takes some time, but it provides some additional benefits such as the following:

Most of the time, services will have a lower memory footprint as a result of building them with the desired options only.

# What version of CustomBuild am I running?

At the moment, CustomBuild 2.0 is the latest release of CustomBuild. Starting version 1.643open in new window custombuild is bundled with DirectAdmin.

To get your DirectAdmin version, run

If your system is a very old one, there is a chance you might be running and end-of-life version of Directadmin and CustomBuild. You may follow the upgrade instructions hereopen in new window to get it upgraded.

CustomBuild has a graphical user interface in DirectAdmin, though you may use the command-line tool if you prefer. The /usr/local/directadmin/custombuild directory contains the build script that is used to execute the commands, and the file options.conf stores the settings in effect. Some of the most useful commands are discussed below.

Get a libashst of CustomBuild installed software on the server:

Get some general help on ./build commands:

You may use grep for variable in options.conf file:

Or just use the ./build options command. The output will be formatted: 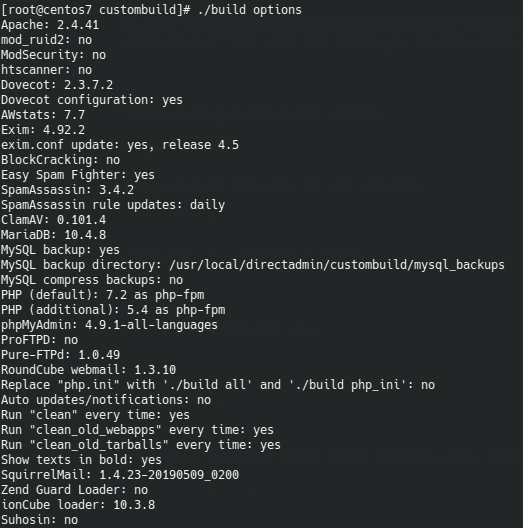 By default, DirectAdmin uses the intermediate ssl_configuration (set in CustomBuild's options.conf file) to set the cipher lists for the services. ssl_configuration=old/intermediate/modern are set based on the lists provided by Mozilla's Handy cipher generatoropen in new window.