Git Manager allows users to create and host Git repositories on the DA server or sync with the remote repository. The feature can be reached via Advanced Features -> Git.

If git is not present on your system: On Debian/Ubuntu, run:

On CentOS/RHEL and other RedHat based distros:

If you run CloudLinux, run this additionally:

Click on Create Repository in Git manager and then enter your data. name is required but remote and keyfile are optional parameters.

Hosting a repository on DA server requires only the name parameter while syncing with a remote repository requires remote to be set and optionally keyfile to SSH key if it's a private repo. Remote can be any of Git-supported protocols however only SSH is supported in a case of a private repo. Webhooks are supported for remotely synced repositories - triggering a webhook does automated fetch and deploy if both deploy branch and directory are set and valid.

Let's click on Create Repository and enter just a name:

Then we click on Create Repository. In the main view we can see our newly created repository:

The right-hand side contains a tooltip available to execute commands quickly without entering into the repository view:

Clicking on the repository name is going to open its view. There we can see more information about the repository such as all branches available, deployment branch, deploy directory and other details:

Let's clone the repository assuming we have access to the server via an SSH password if that's allowed or a key:

Let's hit Save and then Deploy. Upon confirming that the parameters were valid and deployment went well we can confirm that at the receiving end:

In order to view the history of the repository we click Logs:

Here we can see our commit message, date, and commit hash. Let's click on the commit: 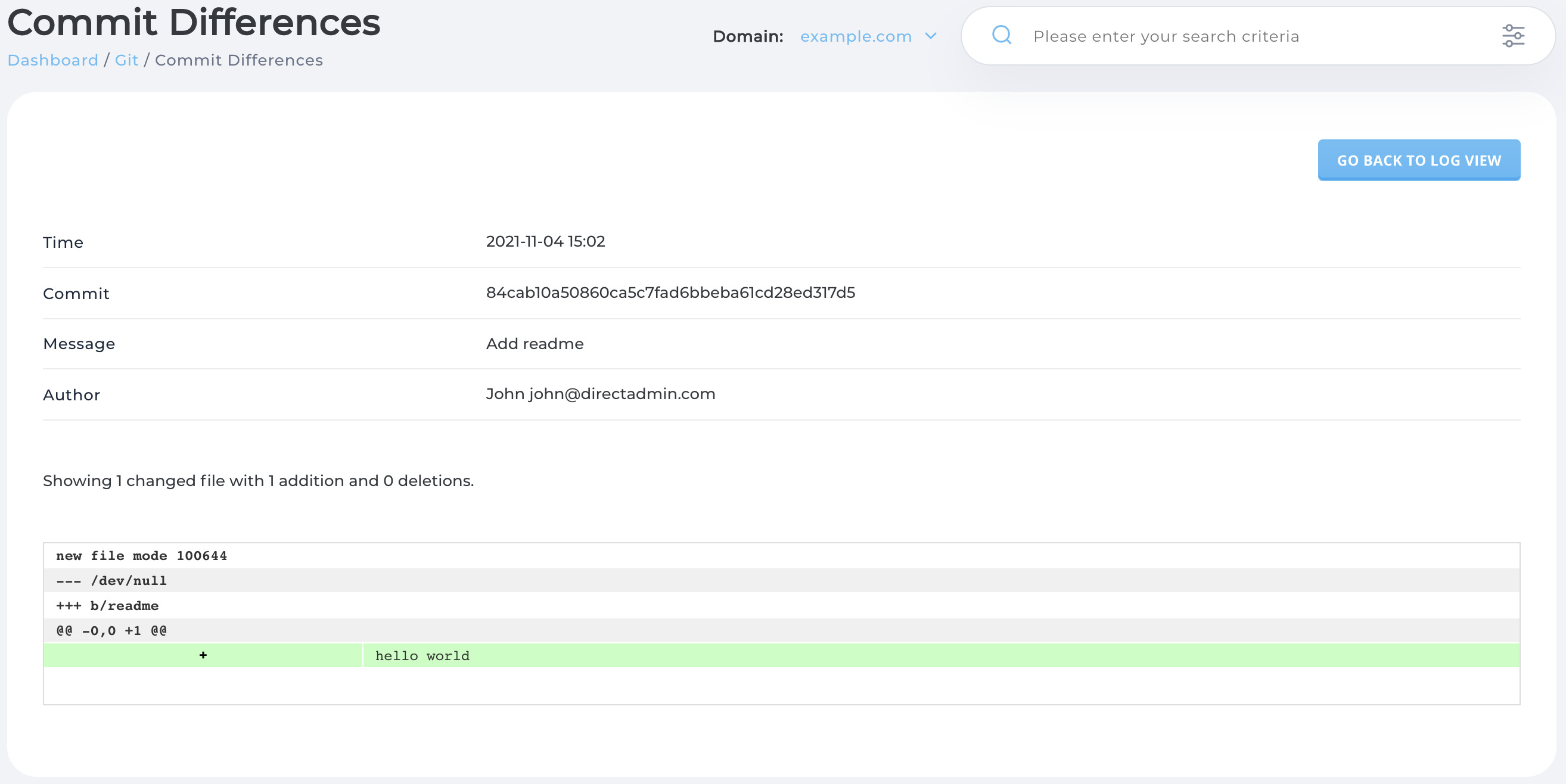 Here we can see the diff of the commit against its parent, message, author, date.

Repositories are placed under the domain path as name.git such as /home/USER/domains/DOMAIN/name.git.

Repositories are initialized and cloned as bare repositories meaning that deploy is simply just git checking out the working tree. Metadata about the repositories is stored in a per-user SQLite at /usr/local/direcadmin/data/users/USER/user.db.

Deploy directory and keyfile parameters must be provided as relative paths, the user's home path is used as a base.

Each repository has a post-update hook, such as:

Triggering the hook above is going to deploy the repository at /home/USER/relative/path/to/home where USER is the current user executing the command. Root execution is not allowed.